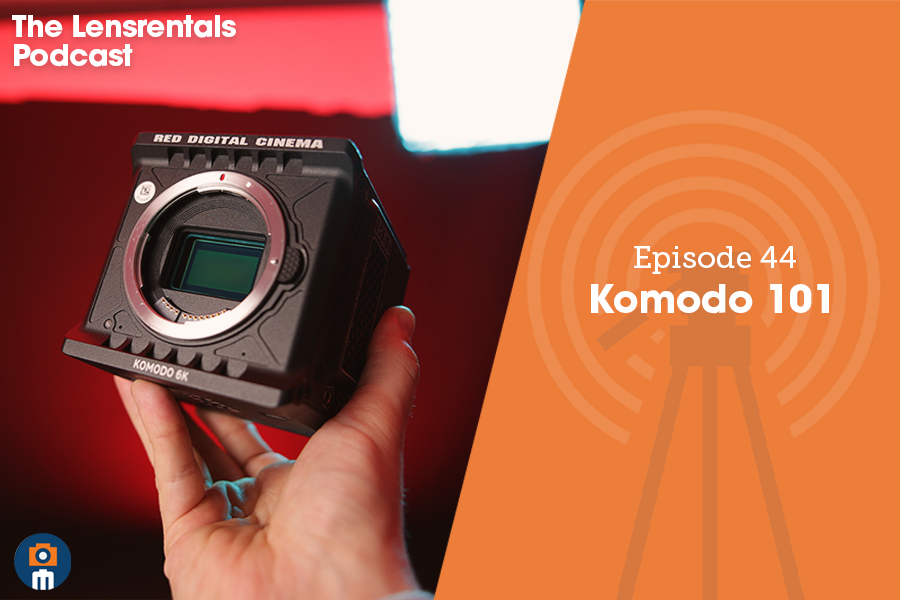 Today is all about the RED Komodo. Workflows, pros and cons, accessories, Ryan, Dom, and Ally stop just short of writing a full love letter to this camera. Dom and Ally each spent some time using the Komodo leading up to this episode and spoiler, both of them were sad when it was time to return their rentals.

So what is the RED Komodo, and why is it special enough to warrant its own episode on the Lensrentals podcast? Well first, it is a RED camera with a sub $6K pricetag, bringing the power of the RED system into a somewhat affordable package. Shooting up to 6K40, the RED Komodo hold up in resolution to almost every other camera on the market, and comes equipped with a global shutter, integrated touchscreen, and over 16 stops of dynamic range. Most importantly, as discussed by Dom in this episode, the RED Komodo is incredibly small. The 4″ cube makes it really easy to tuck into corners, mount to gimbals, and use discretely.

However, the RED Komodo also comes with a lot of interesting quirks that Dom, Ryan, and Ally all touch on in this episode. For one, the RED Komodo uses the Canon RF lens mount – their latest adaptation of their mirrorless platform. While this is frustrating for those who are still using Canon’s EF platform – a staple in the industry, the optical nerds are certainly excited for the quick adaptation to the RF lineup. Canon’s RF lineup is the future of their lenses and offers the highest quality lense ever produced by Canon. While the lineup is still being developed (albeit, quickly), the lineup will quickly match all the different lens options in the EF or PL lineups.

For more information about the RED Komodo, listen in as Ally, Dom, and Ryan discuss why it’s one of the most exciting new products in the video field.

Links Mentioned in This Episode:

Timestamps
Intro – If you’re new to the RED world of cameras never fear, Ally covers the basics to help everyone get to know the system. Both Ally and Dom heard a lot of hype about how complicated a RED workflow was, especially in post. And after hands-on experience with it, they were “blown away” by the experience.

2:45 – Dom thinks the RED pipeline is really smooth and seamless. If you’re a complete beginner we have faith you can figure out a RED DSMC II camera. They’re much easier to just pick up and use than many others in that same class.

5:25 – Dom went mountain biking with it with a DJI RS II with a focus motor connected for a lightweight set up and he said “It. Was. Perfect.” Watch Dom’s footage from this test shoot here.

8:40 – Even with his barebones build Dom thoroughly enjoyed using the Komodo on his mountain biking adventure.

9:05 – Ally’s experience with it was more controlled because it took place in the office. She wasn’t excited about it at first as it was more or less a beta copy. But with each firmware update she’s moved solidly into the “Why wouldn’t you use this product?” camp.

10:35 – RED has packed as many professional features as you could ever ask for in a tiny little box camera. What blows any comparable camera away is feeling the RED feature set inside of a compact camera, without the modularity of the DSCM II line.

11:10 – Breaking down most and least favorite things about the Komodo: For Ally the fact there weren’t many lenses or accessories available to build it out as a system because of RED being very slow to release the production of this camera

12:40 – Ally is a big fan that RED chose to give the Komodo a built-in LCD screen and that it shoots to CFast media.

13:20 – RED likes to push technology forward, so it seems they also want to have control over the speed of their media and keeping the price point at a certain place.

15:15 – Pros of the Komodo for Dom include it being one of the best gimbal cameras he had ever used. Excited by it being a 4″ cube he didn’t have any clearance issues with the body. Monitoring, focusing with the focus wheel, using the touchscreen LCD screen were all great in his experience as well, but the preroll recording option really stood out for him.

19:20 – Getting “the RED image” that camera operators are used to from previous RED’s is also an important element that’s included in this camera.

19:50 – A quick breakdown of the RED raw files and how the high, medium, low classifications work.

23:40 – Downsides for Dom: Thinking he’d get high resolution and high frame rates, as an action sports person he wanted those 4k, 120fps shots. On the Komodo, you can only do 120fps in 2k, at this time as Ally reminds us.

25:10 – Ally says there is a lot of action left in the sensor and she wouldn’t rule out the possibility of recording at more than 2k being available in the future. So far this camera has been like a genie in a lamp for her- ask for a feature and eventually, it seems to show up!

26:20 – Ryan thinks the lack of 120fps might be due to the fact this camera has global shutter. link to article/include some in the intro of this? https://www.lensrentals.com/blog/2021/07/understanding-the-difference-in-global-and-rolling-shutters/

27:20 – Old RED cameras didn’t have much of an issue with rolling shutter, but we’re big fans of global shutter all the same.

29:05 – Ally got to experience the anamorphic modes that came out on a firmware update after Dom wrapped his test shooting. This update addressed camera freezing and LCD shifting it seems. 6k anamorphic modes are specific to 6k, there is added 4k audio support, and the Komodo RED introduced a new communication protocol and a dual-band wifi chip to ensure streaming and wireless control would be possible.

31:45 – Ok, it’s time for accessories! The Komodo has more built-in’s than previous RED brains, but still needs other items to fully function and we get into what we used on our tests, and what we think is non-negotiable

33:00 – FYI: DSCM II accessories don’t work on the Komodo. As was said on the episode: There is no HDMI out. They only put the things that you need on there. And Fuck your HDMI.”

35:15 – Ally recommends the SmallHD ND 7″ and the Focus Pro LED w Komodo camera control. Only the ones that specifically have it, but the process is really easy to set it up. The SmallHD monitors actually will walk you through the set up too!

42:45 – Dom and Ally agree that if this is your first RED you’ll be really really impressed. And if you’re coming to this from another RED camera, you won’t be disappointed.

43:10 – Bringing it full circle, Ally shares there was a time she really did not like the RED Komodo but after once her rental was up she wanted to keep it at her desk longer.