ATEM Amplified. This kit includes four complete HyperDeck Studio Pro 2 systems, the maximum number you can connect to a single ATEM. Please note, this rental does not include a switcher but they are available as separate rental items.

Dual SSD Slots. This recorder’s two 2.5-inch SSD slots give you the potential to record almost endlessly, since recording seamlessly switches to the second SSD once the first one fills up.

Thunderbolt Compatible. The built-in Thunderbolt port operates independently of the SSD ports, so that you can simultaneously record to SSDs and a computer. You can also play back footage from a computer into the recorder via Thunderbolt, which will make the signal available via the recorder’s SDI or HDMI outputs.

Video Signals. This recorder supports SD, HD, and 3G signals over SDI and HDMI. You get NTSC and PAL signals, 720 × 480p, and 720 × 576p support over HDMI, and 4K via 6G-SDI and HDMI. The built-in LCD on the front panel lets you monitor input and playback, in addition to timecode, format, and audio levels.

Output Options. Regardless of the original input, playback from a computer or SSDs is available from all outputs simultaneously. There are two exceptions: 4K output is only available over the 6G-SDI and HDMI connectors, while 480p and 576p are only available as HDMI output.

Intuitive Controls. You get VTR-style front-panel record and playback controls. The built-in jog wheel gives you analog-style control over playback. The buttons are illuminated, so you can easily work in low light. 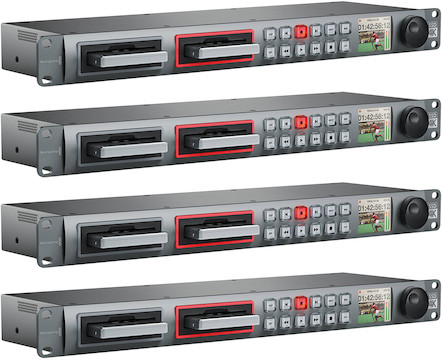