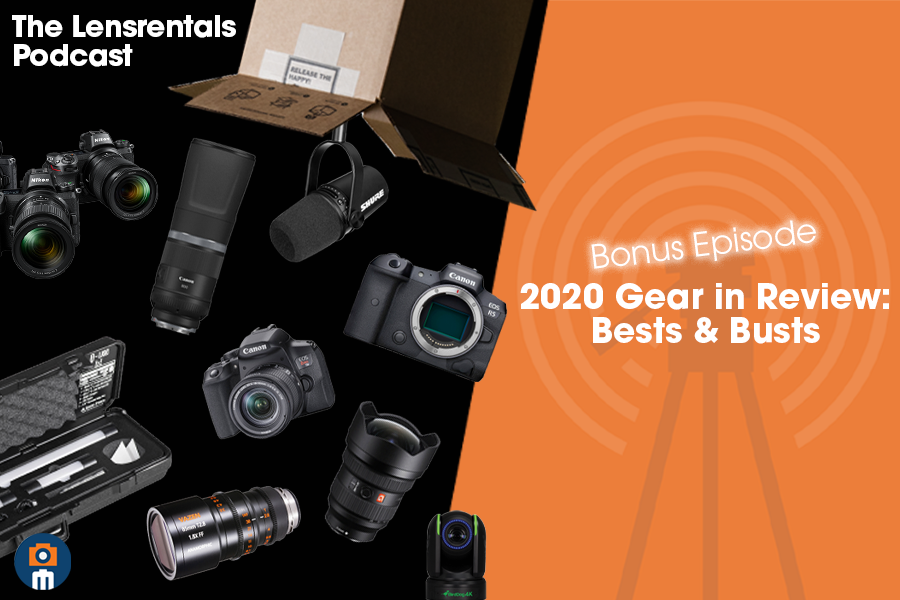 Yesterday, we shared a plethora of information regarding what rented the most and market trends in various categories. But rental quantity doesn’t always indicate favorite products for the year. So Ryan, Roger, Ally, and Zach sat down to talk about their two favorite products from this year, and their biggest busts. Listen along as each of them shares their experiences testing how a large variety of gear for their work, and sharing customer experiences along the way.

Among the busts, Zach, Ally, Roger, and Ryan vent about the need for a Facebook account when using the Oculus Quest 2, how the Nikon Z series hasn’t stacked up to be too impressive yet, and what that means for Nikon as a brand, and how Atomos’ release schedule has been increasing frustrating – particularly with the Neon series of monitors and recorders.

But not all things this year were bad, in fact, the team talks about how some of their favorite products have come out of this year. As Zach says, the Canon EOS R5 is the most impressive camera Canon has made to date, and Roger laments on the surprising practicality of the Canon RF 800mm f/11 IS STM for his time spent at his beach home. While at the same time, Ryan and Ally share their video expertise with the Canon C500 Mark II, and the impressive and expensive Canon Cine-Servo 50-1000mm T5.0-8.9. Listen to the full episode to get the full breakdown of each person’s favorites, and least favorites from this past year, and check back into the blog in a few days, when we ask each staff member for their favorite new products from 2020, and share some of the rental data that corresponds with the new products this year.

1:20 – Ally’s first bust is the Atomos Neon, largely for reasons beyond Atomos’ control.

1:45 – Quick disclaimer: We get into complaints about how some companies handle product announcements. We are talking about the industry as a whole, and not targeting Atomos.

2:25 – Ally continues with the reasons why she doesn’t love the Atomos Neon, one of which is because you have to have an app to control it which is offered in IOS only.

3:50 – Ryan has seen many new products under plexiglass from companies taking preorders and advises not to preorder anything, ever. It’s a loser’s game, you’re paying for R&D. Wait for the items to be released and see if it’s any good or not.

7:25 – Ryan wonders if Nikon fixes its current situation and will it involve a video niche? Roger answers that at one time Nikon lenses were “the” video lenses 10 years ago, and Nikon let the ship sail on that.

8:45 – Zach sees Nikon’s predicament as having to go 1 of 2 ways; Either be incredibly aggressive in getting the staple lenses out, or create interesting and unique lenses that can only be found on that platform.

10:50 – Ryan’s first bust is the Oculus Quest 2, because it won’t be usable without a Facebook account for anyone come 2023. When Facebook acquired Oculus several years ago they said it was going to stay its own independent brand and not be integrated with Facebook and well, that didn’t last long!

12:30 – Zach finds it interesting that Facebook chose this route even in the face of mounting evidence in multiple documentaries about the negative impact of social media, referencing The Social Dilemma and The Great Hack

15:30 – The Canon T8i seems to be marketed to a demographic that doesn’t really exist the way it used to, beginner photographers who want something a little better than their phone. What would Roger want instead of what Canon put out with the t8i? That it be mirrorless, and not legacy tech.

16:25 – We would recommend the Sony 6000 series or to look into a used Fuji XT-2 or XT-3 for those looking to get into photography without going overboard.

19:30 – Her first best pick is budget anamorphic lenses from Sirui which are fully manual, to Vazen with traditional gearing.

21:10 – Ryan and Ally commiserate on how much they dislike some of the gear we’ve offered in the past in the budget anamorphic category.

22:20 – Siuri and Vaizen anamorphic lenses are amazing for the price, when considering the alternative cost more than most people’s car, a few times over!

23:30 – Zach’s first favorite product is the Canon R5, admiring the 45-megapixel sensor, that “absolutely amazing” autofocus, and the fact it can shoot 8k.

26:20 – Roger sees a similarity between the hate the Canon R5 has gotten recently and similar flack the Canon 5D Mark II because at the same time both cameras are extremely popular and difficult to find in stock.

27:35 – What would Zach want in an R5II? Is there an R5S coming soon? More megapixels? Let’s get into some rumors!

28:40 – Ryan’s next best is the Shure MV7. It’s a digital upgrade to the Shure SM7B with some quality of life improvements such as a USB out, an XLR out as well, its own headphone jack, and touch screen level controls on the mic.

33:45 – The only hesitation Roger has about the Sony 12-24mm f/2.8 is that the front element is going to be really expensive to replace. Like half a lens kind of expensive, so keep that in mind if considering purchasing.

34:40 – What is the defining factor of the polarization problem, and can you fix it in the field or in post? Roger explains it’s that the angle of view can change so greatly, and we say fix it in post, but we won’t get into that too much!

35:30 – Ally’s second-best of the year is a Birddog P4k. IP cameras are new territory for us and Ally has had a really good experience working with the Birddog company, and that goes a long way for us!

38:45 – Ally worked with Birddog’s support on developing the Birddog neutralizer to change it back to the default settings back after communicating about how much an issue it was for us.

40:30 – Roger’s next pick is a Canon RF 800mm f/11 IS STM and no one else likes. He likes it because it’s different, it gets adequate 800mm pictures and is way cheaper than any of the other options.

43:30 – Roger has to leave and doesn’t know about any of the other items left on the list anyway.

44:20 – Zach’s next pick is the Quasar Science Q-Lion LED Kit. At first, he was surprised at how frequently he was using them but by now they’ve become a regular go-to item for him for many different lighting scenarios. Ryan’s seen many people use it as a practical on-screen light, and thinks it’s also super helpful as a more traditional light source too.

47:20 – Ryan’s last pick is the Canon C500 Mark II. He used it and the C300 Mark III so it was hard to decide, but he picked the C500 Mark II because he likes the full-frame sensor much more than expected. Ally agrees and was also surprised how much she liked that it was a full-frame camera. They agree that if you’re going for a very specific look, you want full-frame, even though they wouldn’t call it “mission critical”.

49:30 – Ally’s favorite feature of the Canon C500 Mark II and C300 Mark III is the Locking EF-C mount. The super secure mount always took priority for her, and she feels Canon solved this issue with the locking mount. It’s modular without being bare-bones, or too overwhelming.

52:10 – Wrap up and a plug for The Lensrentals Pitch Contest.