60p in 4K. The RAW upgrade adds the ability to send a 59.94p signal out to a recorder and record slow motion 4K footage. The FS5 can also record DCI 4K at up to 120 fps for up to four seconds by using the internal cache recording function of the camera.

Small in Size, Huge in Versatility. The FS5 packs a large feature set into a small form factor. It offers the benefits of a large camcorder in a package that’s closer in size to a DSLR. Weighing in at just under 5 lbs., the PXW-FS5 is a great candidate for stabilizers, sliders, and general running and/or gunning.

Smart Grip. Sony introduces a new version of the Smart Grip for the FS5 with full 360° rotation, assignable buttons, an assignable dial, and a joystick to enhance control.

Dual SDXC Card Slots. The Sony FS5 uses industry-standard SDXC media and offers a variety of recording options for file spanning and redundancy, as well as the ability to record proxy files with the same name and timecode as the main recordings.

High Dynamic Range. The 12-bit RAW functionality provides an enormous amount of detail and information. It gives you nearly fourteen stops of dynamic range in your footage.


For the run-and-gun style shooter who refuses to cut corners and wants a future-proof camera, there’s really only one option: the FS5 w/ FS RAW Upgrade. Take all the perks of a normal FS5 and, with...

For the run-and-gun style shooter who refuses to cut corners and wants a future-proof camera, there’s really only one option: the FS5 w/ FS RAW Upgrade.

Take all the perks of a normal FS5 and, with the simple addition of a 4K RAW compatible recorder (Odyssey 7Q/7Q+), you have a RAW powerhouse. Its older brother, the FS7, needs the addition of a bulky, proprietary XDCA unit and then a recorder on top of that. This camera eliminates the need for another Sony-specific piece of equipment and the addition of V-mount batteries to your kit. Keep in mind that RAW is an unnecessary step in most cases, but a client might demand it. Or maybe you’re just worth it. 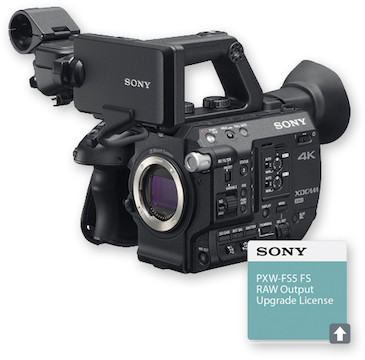