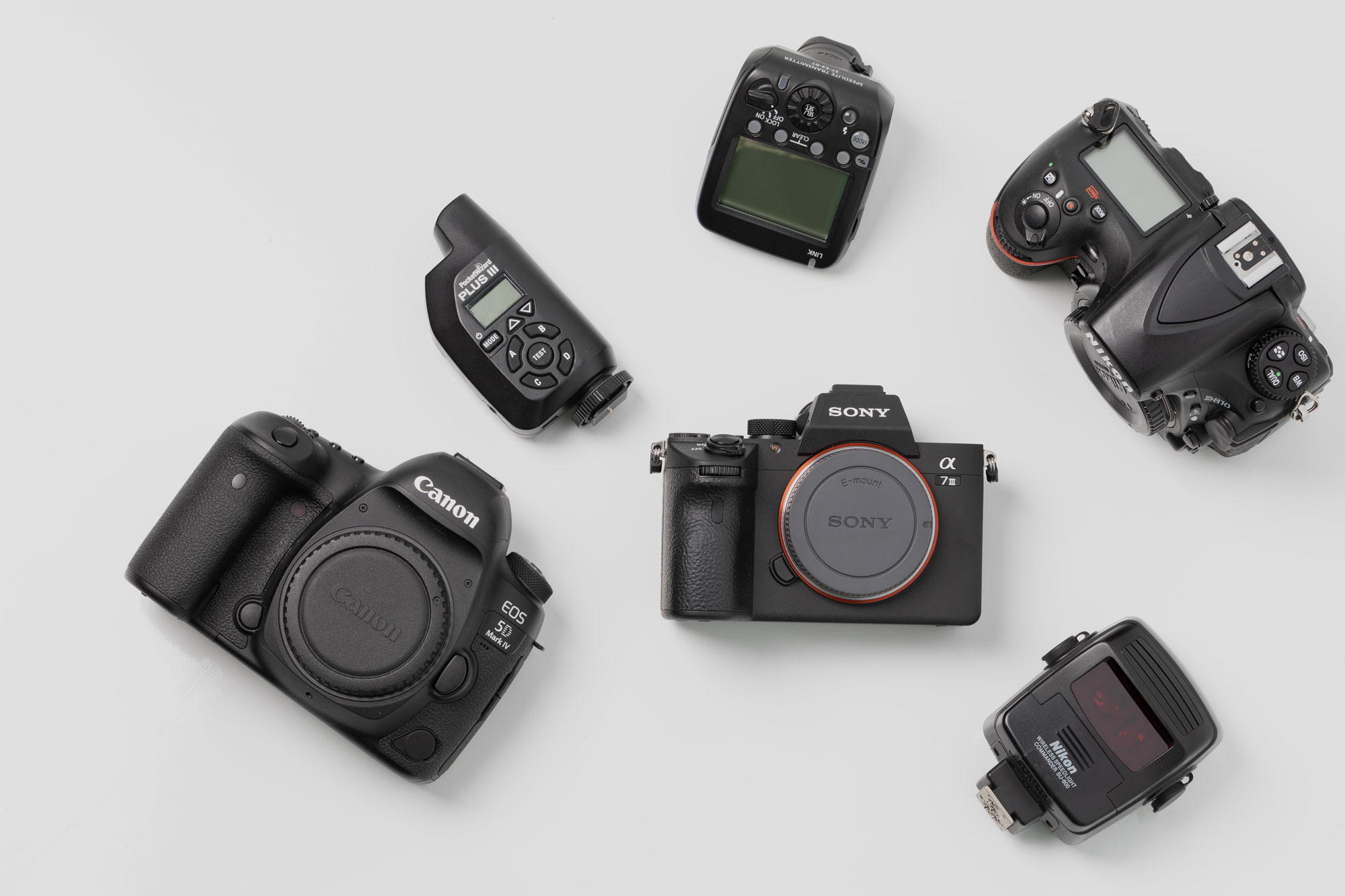 So today we’re going to talk about all the wireless trigger options we have available in our inventory, along with a brief explanation on how to use each system, and the benefits of them. By and large, all trigger systems are broken down into two categories – Brand Specific, and Universal. A vast majority of strobe manufacturers will have their proprietary trigger system, with its own set of advantages – but there are a few systems (such as Pocketwizards) that are designed to work with a wide variety of strobes. So let’s start with the brand specific options. Please keep in mind that these are just the systems that we carry in our stock at Lensrentals.com, and of course there are additional third-party options, but if we covered absolutely everything, we’d be here all week.

Additionally, most transmitters work in one of two varieties – optical and radio. So let’s go over the two most significant differences between the two.

Optical slave triggering is exactly what it sounds like, and requires a line of sight between the two (or more) flashes. Essentially, one of the flashes will be fired from your camera’s hot shoe (or through the use of a cable), and the other flash (set in optical slave mode) will then fire once it “see’s” the other flash fire. Think of it like how your TV remote works. This system generally works pretty well, particularly in darker environments, but does have limited range and use. This feature is included on most speedlights and studio strobes but is generally only recommended to be used if there is no other option.

Of the two, the radio trigger is the more useful system when using flash, as it has significantly increased range and far more usability. Radio triggers send a radio transmission from the transmitter to the receiver, giving you up to 500ft of obstructed distance, depending on the brand and environment. Additionally, radio triggers will often let you change to different channels, to allow you to fire multiple sets of lights for different settings, whereas optical will fire each and every time it detects a flash firing.

While Canon doesn’t make a transmitter and receiver directly, each one of their speedlights has a variety of pairing and triggering systems built within the unit themselves. Many of Canon’s speedlights have an option for triggering the flash using a third party trigger (by use of a sync port or headphone jack), they also have two systems built into most of their units – Optical Slave & Radio Transmission. Optical works just as described above, so let’s discuss their radio trigger platform.

Aside from optical triggering, Canon also has radio triggering in some of their speedlights (usually noted with an RT in the name of the product). Radio triggering can be done with multiple speedlights with radio functionality (like the Canon Speedlite 600EX II-RT), or through the use of the Canon ST-E3-RT and radio triggering speedlights. This system offers two-way transmission up to roughly 100ft and allows you to fire up to 15 different speedlights, each with their own individual settings and adjustments.

Much like Canon above, Nikon also has several speedlights and tools available for wireless triggering of the flash. As mentioned above, most Nikon flashes also have built-in sync ports to offer wired flash syncing, and also have several units with optical slaving as well. However, Nikon also has their own transmission unit, known as the Nikon SU-800.

Nikon’s triggering system works a lot like Canon’s system, offering you control of up to 3 groups of speedlights, with the use of a simple menu interface on an LCD. While Nikon’s SU-800 does offer TTL capabilities and a large array of flashes (SB-910, SB-900, SB-800, SB-700, SB-5000), it is an optical trigger, limiting it’s range to only around 60ft.

To start off the strobe-based radio triggering systems, it’s probably best to lead with Profoto. The biggest benefit of the Profoto Air system is that it’s already built within the majority of the Profoto strobes available, meaning you only need to have a transmitter on your camera if you’re using Profoto strobes. However, the systems feature set doesn’t stop there, but to get into each little feature available, we’ll want to break down into the three Profoto Air platforms available. 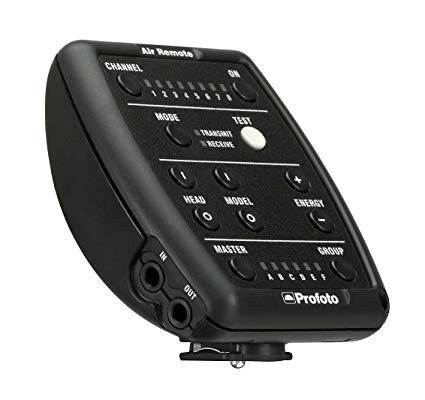 The first and older system is the Profoto Air Remote Transceiver. The Profoto Air Transceiver offers wireless triggering up to 1,000ft, and the ability to adjust the power settings of individual lights on 8 different channels and in 6 different groups. The remote also gives you a full range of controls, such as the ability to switch modeling lights on/off of each individual strobe, as well as turning them on and off from the remote. The remote is also universal, allowing it to be used on any camera with a hot shoe (or with a PC sync port if you prefer). 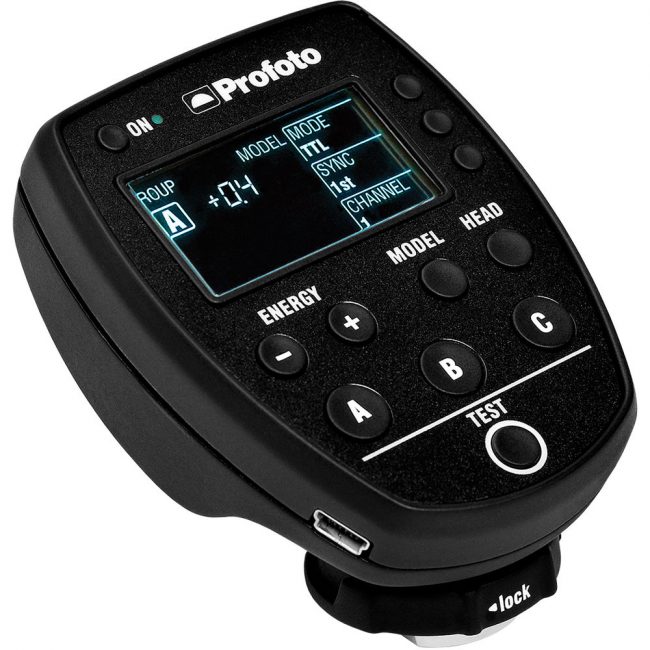 The upgraded model of the remote above is known as the Profoto Air TTL Transmitter. This remote offers the same range and all the features as the remote above, but then also offers TTL mode for the supported strobes (Profoto B1/B1X, Profoto D2, Profoto B10/B10+, Profoto B2, Profoto A1). In addition to TTL mode, you’re also given a digital screen, along with the ability to change the shooting mode to High-Speed Sync, Rear Curtain Flash and more. However, in order to get TTL mode out of the remote, each brand has a specific model for the TTL remote (Canon/Nikon/Fuji/Sony/Olympus). 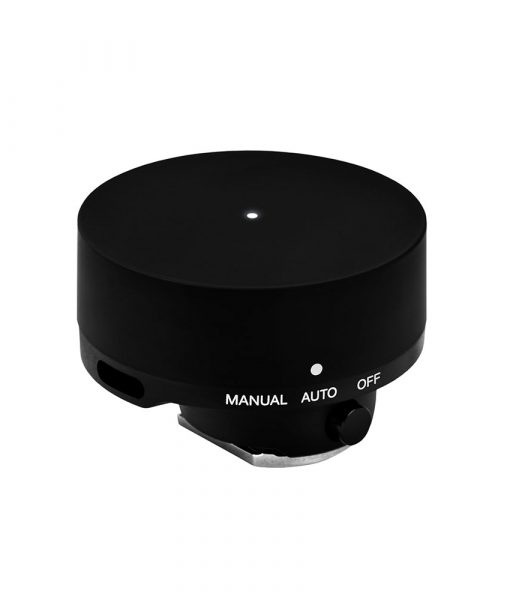 Cybersync is the offering from Paul C Buff (or commonly known as Alien Bees), and offers a wireless system for their Einstein Studio Strobe and DigiBee platform. The Cybersync system comes in two parts to the system – the receiver and the transmitter. For the transmitter (which connects to your camera hotshoe), we have two options available – the Cyber Commander and the CyberSense. 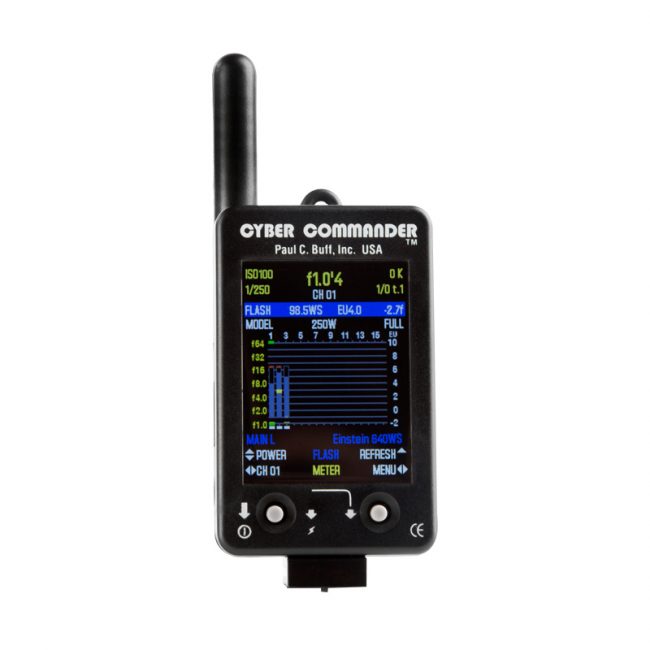 The Cyber Commander allows full control of 16 different frequencies on 16 different channels which can be grouped into 8 different groups. It is without question that the Cyber Commander is pretty complicated in its practice, opting for a digital screen with multiple menus over a more simple interface. However, it does give you full control of all the lights you could possibly need, and once you figure out the platform, you’ll likely be one who swears by it. 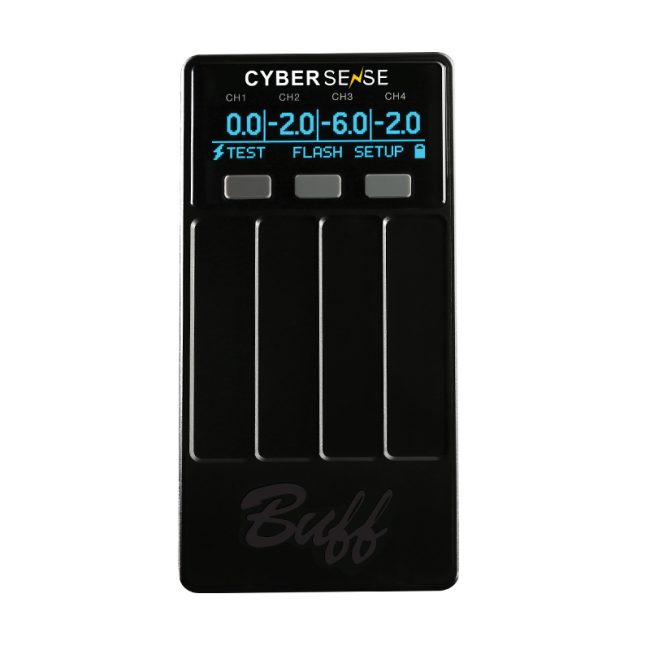 The CyberSense is the more practical and easy to use trigger platform from Paul C Buff. Still pairing with the Cybersync transmitters (which we get into below), the CyberSense allows full control of 4 different strobes (or channels) through the use of its simple touch control system. With a small digital screen, a few buttons and 4 sliders to adjust power, the CyberSense is pretty intuitive in design and pretty easy to use out of the box. 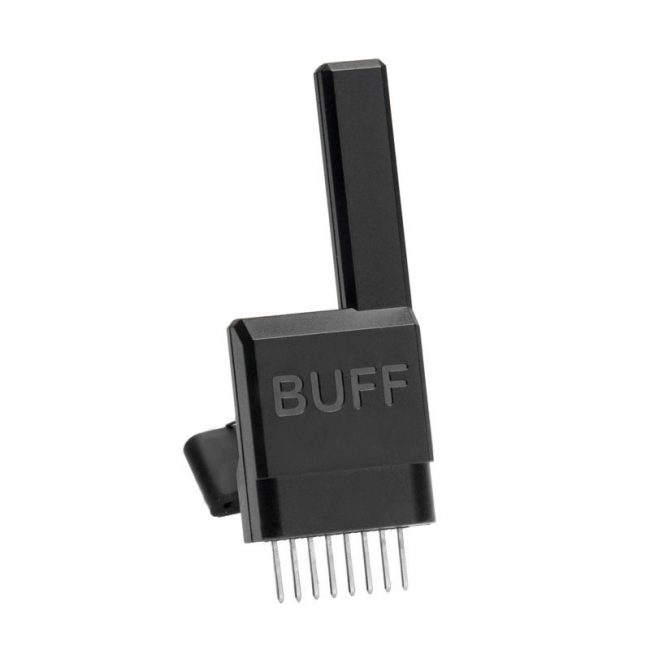 As mentioned above, the two former mentions are just the transmitter of the signal (and traditionally placed on the hotshoe of your camera), but your light still needs to receive that signal, which is why we also have the CyberSync Transceiver systems. These are incredibly simple by design, and plug the exposed pins into Einstein and DigiBee strobes. Once plugged in, you have access to the radio controls built within the menu of the strobes.

PocketWizard’s are generally regarded as the industry standard when getting into off camera lighting because they’re unique in design when compared to the other previously mentioned triggers – they’re universal to all lighting brands. Whereas Profoto’s Air platform is exclusive to just Profoto, and CyberSync with Paul C Buff, PocketWizard is designed to use the headphone jack found on most studio strobes, allowing them to be used on nearly all lighting brands and strobes. While this does limit some of the specialty features (such as TTL and High-Speed Sync), it does allow you to mix and match your lighting system without the hassle of switching out wireless triggers. 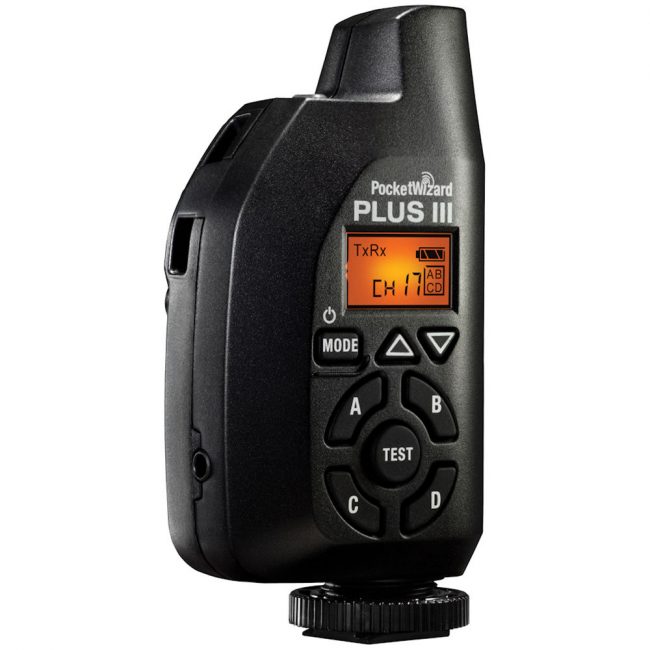 The PocketWizard Plus III is their flagship transmitters, offering an impressive 1,600ft range (through the use of the repeater mode) on 32 different channels, and works on all main camera manufacturers (just as long as they have a hotshoe). It’s worth noting that with the PocketWizard system, you’ll need at least two units – one on camera and one attached to the light – in order to successfully trigger any lighting units. 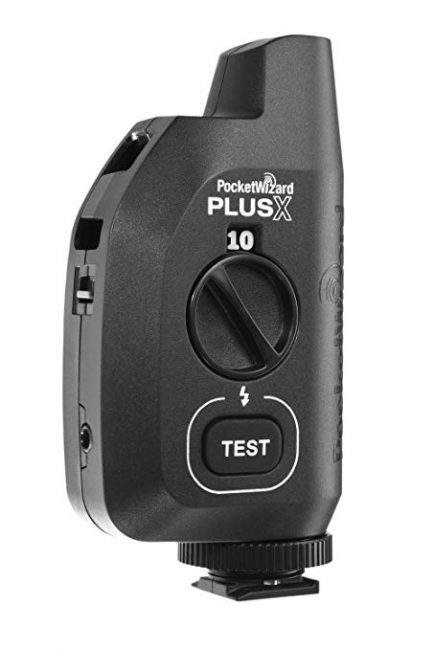 So that pretty much covers what we have to offer in regards to wireless triggering systems. With each one having their own set of advantages and disadvantages, much of trigger selection comes down to personal preference. Do you have a system that you prefer over the others? Feel free to chime in in the comments below.